Presentation of the Hardware

The TekTrain device is one of the key elements of the system, as it determines the capabilities of the applications that can be developed in the context of educational robotics. In order for the TekTrain product to fulfill its educational purpose of assisting the teaching of robotics in the school environment, the TekTrain device is required to support a set of sensors and actuators for proper interaction with the environment. 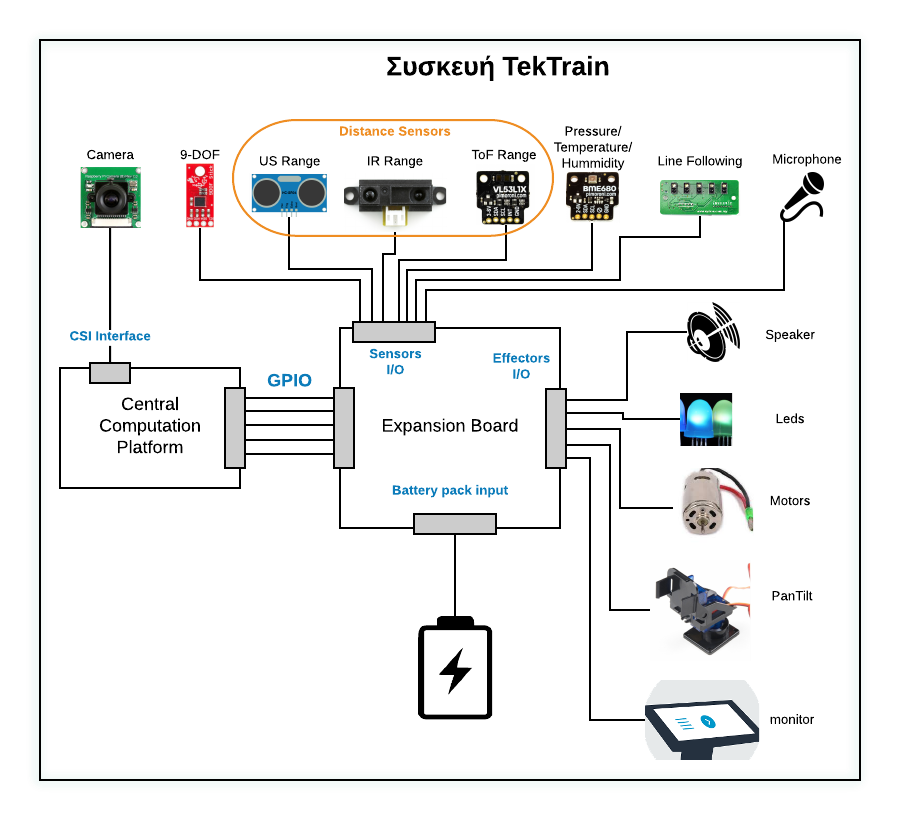 The hardware of the TekTrain device is divided into the following four categories: a) mobile platform, which provides support and mobility to the TekTrain device, b) central computation platform, c) peripheral sensors and d) peripheral actuators. In addition, a single platform (Expansion Board) provides support and connection of all sensors, actuators and battery to the computer unit.

This unit consists of 2 subunits. An integrated system in which the device control software will run and an “expansion board” type board in which the power supply and interconnection circuits of the peripheral devices will be integrated. The processing power should meet the computational requirements of robotic algorithms, such as motion control, obstacle avoidance, mechanical vision and hearing, face identification, voice command recognition, etc.

The motors are controlled via the DFRobot MDV 2x2A DC Motor Controller (L298N). 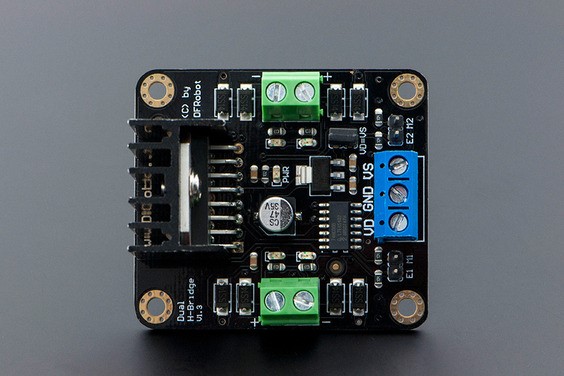 Based on user requirements, the TekTrain device should be able to move independently in space. This requirement indicates the need for a mechanical platform with integrated wheels and engines, which will be the basis for the development of the TekTrain device. Also, the mechanical construction of the base should allow the installation on it of the central computer unit, peripheral sensors and actuators as well as the power distribution circuits.

In addition, in order to control the movement of the base, it is necessary to have appropriate control circuits of the motors and the sensors encoding the motor trajectory. The motor control circuits to be integrated should allow speed commands to be sent to the motors via a digital protocol, such as Pulse Width Modulation (PWM), so that they can be controlled via the host unit. To correct the position estimation error (odometry), each engine must have a position / track encoder mounted on its axis. This allows speed control via an automatic closed loop control system. The following is a table of characteristics of the mobile platform base selected for the TekTrain device.

The device is based on a drive platform which consists mainly of a metal frame that carries the drive wheels, the wheel motors as well as suitable recesses and protrusions for the placement of the system sub-units.

As for the dimensions of the TekTrain device, it should not exceed 30 cm. This is related to the usability of the device and the safety of the students. Also, special importance is given to the weight of the final device, so that it does not exceed 1.5 kg. The use of the DFRobot Baron platform has been chosen. The platform is designed around a chassis made of aluminum, in which there are suitable recesses and protrusions for fixing the various modules. Includes 4 DC motors for wheel drive, 4 wheels and two wheel position / rotation speed encoders. 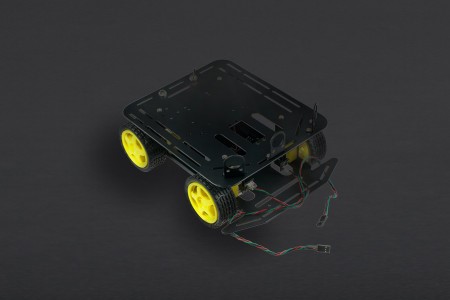 The choice of sensors that will be supported in the project is important as they are the key elements that will be used in the context of the educational missions provided by the TekTrain product, both by students and teachers. It is also particularly important to support sensors of different types, in order to give more flexibility to the applications that can be developed. The sensors can be adapted at will, by the individual user, to different parts of the base of the TekTrain device, depending on the needs of the respective training mission, since it determines the necessary sensors / actuators that must exist in order to be processed correctly. For example, one exercise may use only the main actuators, while another may involve interaction with the user through a microphone or distance measurement. For this reason, at any time, it should be possible to switch sensors on the body of the platform, but also the automatic recognition of the connected sensors by the device control software. The following table lists the sensors that will be supported for customization on each TekTrain device. These sensors are based on user requirements.

Actuators are the elements that affect the environment by changing its state. Such parts can be motors, leds and a speaker. Both the sensors and the actuators will be sought to be able to adapt to different parts of the base, depending on the needs of each application.

6 HC-SR04 ultrasonic sensors with a measuring range of 2 cm to 4 m are placed on the platform. Each requires a + 5V DC power supply, a trigger input signal and an output signal that gives the acoustic return pulse to measure the distance. The sensors are connected to the expansion board via headers J3 to J8. Each header provides power supply (+ 5V, ground) and two terminals for input and output signals (DIN and DOUT). 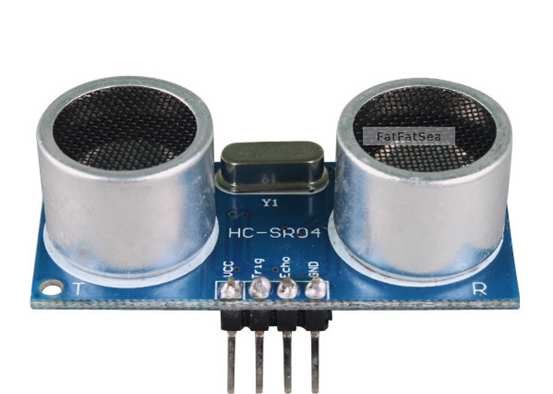 The LED strip requires, in addition to the power supply, an additional PWM signal to control the LEDs. 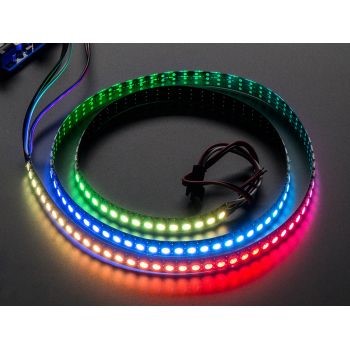 You can find out more about which cookies we are using or switch them off in settings.

This website uses cookies so that we can provide you with the best user experience possible. Cookie information is stored in your browser and performs functions such as recognising you when you return to our website and helping our team to understand which sections of the website you find most interesting and useful.

Strictly Necessary Cookie should be enabled at all times so that we can save your preferences for cookie settings.

If you disable this cookie, we will not be able to save your preferences. This means that every time you visit this website you will need to enable or disable cookies again.

Video providers can place cookies on your device if you watch their video on our site.
If you disable these cookies you may not be able to see the embedded videos on our site.

Please enable Strictly Necessary Cookies first so that we can save your preferences!